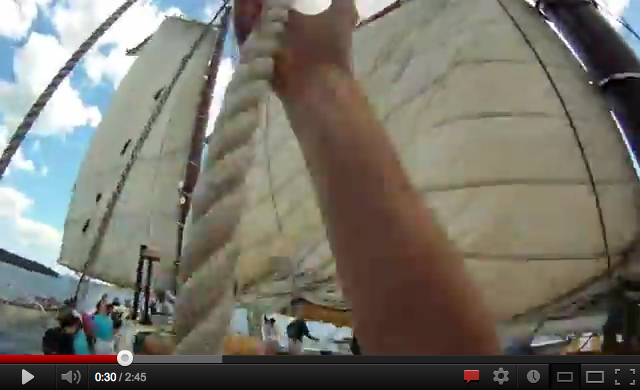 Its always good to go back to the place where you began. For Ben, thats aboard schooners. He began his sailing career as a mess mate aboard the Lewis R. French, and this summer, he returned to lend a hand as relief crew (mate, deckhand, navigation instructor, and mess mate) aboard the French and the schooner Mary Day.

It was only one ring of the bell before he realized what an essential part of his sailing career traditionally rigged vessels have been. After nearly a decade aboard schooners and square riggers of 65 to 135 feet, six sails to seventeen, and twenty-six to sixty-two dirty dinner plates to wash, that his approach to sailing would not be the same had he not had his initiation aboard such a ship.

It was the rigors and historical aspect that traditionally rigged ships brought into his life that helped him understand how sailing became what it is today. “It gives more meaning to what sailors do today,” he told me upon his return to shore. His sea legs were strong and his internal compass once again pointed to the horizon. “Going forward I will work harder to keep that history in my daily life much more. I don’t want to forget again. It would be fun to retrace the steps of some of the old engineless sailors, use the same tools, and not let the art and skill of seamanship get lost in the technologies we have now to ease and comfort our journey.  We’ve taken it to an opposite extreme. You could sit in the cabin at the navigation station and never really feel the wind on your face. And it wouldn’t matter anyway, because there is a wind instrument to tell you its direction.”

We can take our cue from Ben, who found it important to look back at history, his own personal history and that of seamanship in general, to see where it all came from.

Take a look at the video he had fun making aboard the schooner Mary Day!