I have been hard at work lately. While during the winter, I struggled to find work and pay the bills, now I am swamped with several, although modestly paying, jobs. I find all of my work very satisfying and have no trouble working overtime. But with several days of overtime strung in a row, I decided to take the day off.

I began the day with a long lie in bed. So long, I could have recited the entire script of West Side Story, given that I was driven to do so. But I was driven more to relax. And at just the moment when staying in bed any longer would have been more work than relaxation, I could hear the sound of John Rose’s dinghy motor growing louder and louder.

I sat up. “Ahoy,” I shouted. Even from a seated position in my aft cabin, I need not move much to see in either direction outside my boat.

It was his usual morning “drive-by.” On his way to satisfy his need for coffee, he slowed as he passed by Daphne. “Good morning,” he shouted back. And with a tip of his head, he was off again.

I decided to get up and begin the day’s work. I opened my forward cabin doors and out spilled Dory with a squeak and flutter of his voice. He went about his morning routine of climbing atop the dodger, sun bathing, chasing the bitter ends of loose lines, and patrolling up and down the deck of the boat so as to make sure that the gulls or dogs ashore don’t cause any trouble aboard Daphne.

I dove into my daily work too. It began with a jog, short brisk row, and a dip in the ocean. Then, I went straight to work scraping the varnish from my bowsprit. I was in no rush to complete the project right away, so a small ripple in my plans wouldn’t worry me. But this wasn’t a small ripple, it was a splash! And I was very worried because Dory had fallen overboard! Peanut, my dinghy had drifted over to the boat and Dory, being the curious sailor, hopped aboard. Then, when he tired of the little boat, he turned to jump back into Daphne, missed the cap-rail, and slid into the ocean.

Dory can swim! He began swimming around the boat looking for a way to get back in, while I hopped into Peanut, released her painter, set the oars, and pushed away from Daphne. But I didn’t go far. Rushing to get to Dory, the painter knotted and was stuck. As I worked to untangle myself, Dory was swimming further and further away. Finally free, I headed over to Dory. His wet little head, ears tucked back, was just visible above the water’s surface. Cold and scared, he began to cry out. His loud wail sounded through the harbor, and I swear he was saying, “Momma! Momma!”

“Its okay, Dory, Momma is here.” And I reached in, grabbed him by the neck, pulled him into the dinghy and breathed a sigh of relief. Dory, hiding under the thwart and shivering, was safe again and the beating of my heart slowed. 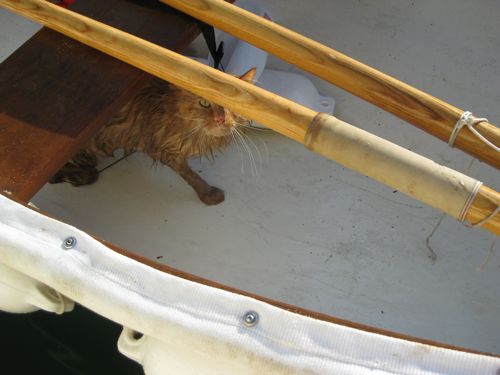 When we returned to Daphne I gave him a shampoo, freshwater bucket bath, and lots of treats. The sun was warm and fifteen minutes later he was nearly dry and fluffy again.

On this day a boat I had never seen before pulled up next to me and tied on to the nearest mooring. The boat, just launched that day, was named Magic Time and a young couple began the work of setting her up for summer. They were bending on sails, coiling lines, and inflating the dinghy. Ein and Nora, a handsome couple, were speaking quietly to each other. I watched for a few moments as they worked. Nora spent more time in the cabin, and Ein, dressed nicely in khaki pants, leather shoes, belt, and a button down tucked in dress shirt seemed on a mission to complete the work.

“Are you going sailing?” I asked.

“We’re hoping to.” He shouted back. I could see Nora’s head emerge from the cabin. They were locals, not liveaboard transients.

“I’m Teresa and this is Dory.” I said and held Dory up so they could get a good view. After they introduced themselves, we had a brief chat about the usual; where we are from, our boats, how long we plan on staying, and closed with the resolution that the next time they are aboard, they will have me over for cocktails and I will have them for carrots and hummus.

Then I had a craving for carrots and hummus. I still don’t have refrigeration yet. I’m saving money and searching for a solar panel to provide power to my boat, but for now I am growing used to using flashlights and making frequent trips to the grocery for fresh food. Once I knew Dory was warm and happy, I headed ashore, hopped on my bike and pedaled to the grocery store to purchase only food that does not require refrigeration. I selected powdered milk, a large bag of carrots, hummus, crackers, two apples, and some raw milk cheese.

As I pedaled down the hill, I could see the town lying low in front of me, the ocean stretching far behind it. The harbor was packed with boats, with many rows of masts standing tall and quite. And I thought to myself; what a wonderful secret little world it is out there. While shore folk bustle about, strolling up and down the streets, stopping in for a drink or to shop and never saying much to each other but an occasional, “excuse me,” the liveaboard folk buzz between boats, sharing food, stories, company. And when a new boat arrives, they are always greeted and treated warmly.

Back at the dock, I unloaded my groceries, carried them across the beach to my dingy. I noticed an old man back his truck to the beach. There was a fiberglass dinghy in the truck bed and after a moment, I realized that he was going to try to carry the dingy to the shore alone. I set my groceries in Peanut and headed over to him.

“Would you like some help?” I asked. His reply was sweet and slow. “You are so kind,” he said, “I’m here only a few minutes and kind people are already offering me help. Thank you.” His hair was graying, his movements were slow, and he was hunched over a little bit. I wished there was another person to help, so that he wouldn’t have to lift a finger. But his looks were deceiving and he surprised me as together we carried the dinghy down to the shore.

By this time, my stomach was growling and I was ready for lunch. On my way back to Peanut I nearly tripped over a bucket of crabs. I stopped and stared. There was at least twenty, piled on top of each other. “I caught them all myself,” said a round little boy with a pale face and pick cheeks. “Wow!” I said, “You weren’t scared that they would pinch you?”

“No way!” He shouted and off he went down the beach.

I tie Peanut to the town dinghy dock right near a public beach. There are often sunbathers and beachcombers, few actually go swimming. At the end of the dock a young man was lying with his arms outstretched and his neck tipped back so that just the crown of his head was touching the water. His eyes were closed. “Excuse me. I’m just going to get in my boat now.” He opened his eyes and a slow smile spread across his face. “Where did you sail in from?”

“What?” I couldn’t understand him. Hi accent was thick. It was obvious he wasn’t from here and English wasn’t his primary language.

“Where did you sail in from?”

“I live here.” I replied as I climbed into Peanut.

And as I cast my painter from the dinghy dock, setting Peanut free and en route to Daphne, I turned back to hear him calling to me, “It is a nice way to live, isn’t it?” 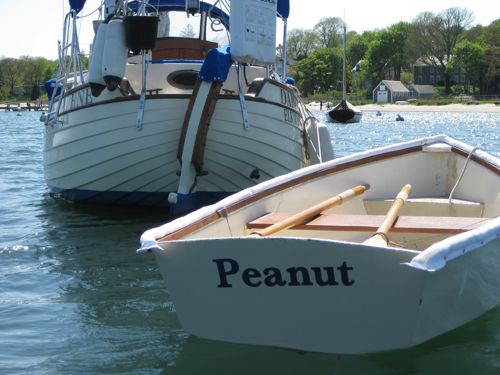