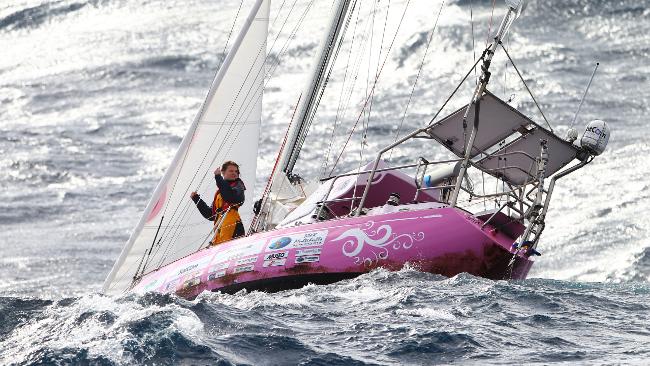 Jessica Watson is a sixteen year old girl who recently completed an amazing solo sail around the world. Her circumnavigation was accomplished without stopping at all. Only a few days ago I was able to speak to Jessica and ask her some questions about her adventure, future plans, and of course simplicity.

What impressed me most about Jessica is her humble attitude, despite having just finished such an amazing journey and being the youngest to do it.

There has been controversy surrounding her voyage, particularly because she is so young. Some say she shouldn’t have been allowed to go. Some insist one does not have the maturity to handle such a challenge at 16. Being a schoolteacher, I would agree. In most cases. However, if there is a 16 year old that is up for the challenge, its Jessica. It’s first evident in her book True Spirit, then evident again in our conversation.

JUNE 20, 2013 UPDATE:
I just learned that filmmakers are planning to make a film out of Jessica Watson’s book True Spirit. Great! I love sailing films and there should be more of them. Jessica’s story is one to make headlines and a film about, but her book isn’t. I hope the film shows more heart than the book. What did you think of the book?

Below you’ll find a bit of our conversation:

T: Congratulations, Jessica, on your sail. Its such a big adventure and a big challenge and I think that’s such an accomplishment at sixteen. I’ve been a sailor for quite a long time and although I’ve been offshore, I haven’t undertaken something quite that big. So, congratulations its excellent.

J: Yes. Thank you very much.

T: I know your busy, so I’ll just ask you a few questions. Pink Lady is ten and a quarter meters in length overall. Could you envision yourself living on a boat like this permanently when you become an adult?

T: Do you feel that living in a small space like that has taught you lessons that you could apply to your life back home?

J: Yea, definitely. I’m mean it’s living on a boat. Living in a small space. You know, things like not wasting water. Just really simple things like that. It makes you appreciate.

T: I read you book True Spirit. You speak about how being a small girl comes with some frustrating stereotypes that people think maybe you aren’t strong enough to be a sailor. I can understand that, I’ve experienced that too. But then on the other hand you’ve painted your boat pink and name her, “Pink Lady” which is very distinctive, and…

J: I think that’s the exact reason why we’ve painted her pink because we wanted it to be this cute little boat and it’s incredibly tough. Ready to take on the world at the same time.

T: I agree and I think that’s a great reason. What were you motives for writing the book True Spirit, and will there be another book?

J: I love writing. I really love writing, but I think it’s kind of like a book that inspired me to sail around the world, Jesse Martin’s book which I really, really enjoyed. The publishing company actually came on board as a sponsor, so it was really incredible. I was actually writing it while I was out there. I just really enjoyed it. The main thing is, I hope people take away from the book is they can share the voyage with me.

T: Were there certain items like a memento from home that, although not necessary, you simply did not want to leave behind?

J: Yea, there were lots of little things. I had lots of little trinkets and good luck charms, my stuffed toys, and that sort of thing on board. So all that came with me.

T: Did the importance that you placed on these items change over the course of your sail?

J: They reminded me of home, so that’s important.

T: I read about your dismasting, it’s a very unfortunate situation and I’m sorry about that. But I think its great that you continued on with the voyage.

J: Well, I got an incredible amount of support after the collision saying, “You should keep going, its what you want.” It never even crossed my mind that I wouldn’t keep going. It shouldn’t have happened but it did and its amazing it happened before I left because it gave me a little more confidence.

T: Before the dismasting you mention in your book that you had an AIS and a radar, and you set an alarm just before going to sleep. And I was wondering what was the alarm for, and how, with all those safety electronics, did the ship approach without being noticed by you?

J: Yea, that is a good question. What exactly went wrong? You know I did have equipment on board and when it comes down to it, strangely, in fact it’s the same thing the report shows, that you don’t know why this happened. And you can actually find the full report which is great and really fair on the website.

T: Did you ever try your sextant while you were out there?

J: No I didn’t actually get it out and have a play with it. But you know, it was more a safety backup than anything. Its really great to have all the instruments. But you come to rely on it, obviously, a bit as well. And as much as the communication that was occurring was really great, I did have these days, I certainly had my days when I just did not feel like talking on the satellite phone. Its not that I was in a mood or anything. Its that I just didn’t feel like talking.

T: Were you able to speak to someone every day?

J: Yea, I was speaking to home and all my team every day, checking in. I also had my tracking equipment and they were able to follow my position constantly.

T: Do you think you’ll ever sail around the work non-stop again?

J: I’d love too. I would definitely love to do it a lot faster one day. And I would like to do it where I stop. But I definitely want to sail again.

T: Where would be a destination you would want to stop at?

J: Where wouldn’t be? I would love to cruise Patagonia and see that part of the world.

Check back again soon for a review of True Spirit by Jessica Watson.