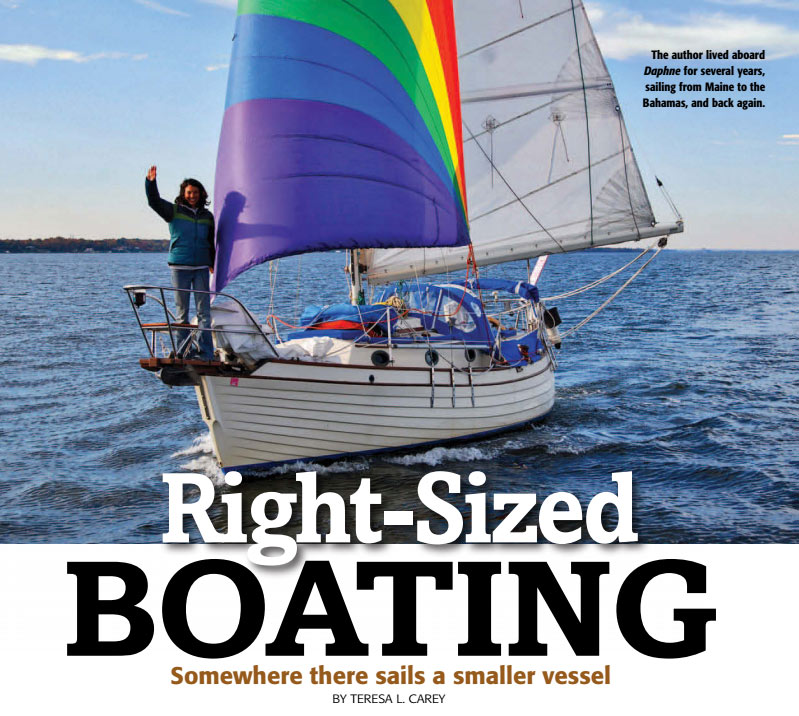 VOYAGING ON A BOAT is a good metaphor for the voyage of life. Stowage space is minimal, requiring the distilling down of possessions to only the most important. Things that break easily, have no useful purpose, or have to be carefully handled are left behind. The same principle that applies to possessions also applies to relationships and activities. For activities this means clearing out the meaningless hustle and bustle, and living only with the most enriching endeavors. When applied to relationships, what remains are the closest mates—those whose friendship is resilient and whose love is able to withstand much wear.

When I moved aboard Daphne, my 27-foot Nor’Sea 27 sailboat, I saved a few nooks and crannies to carefully position trinkets of warmth and mementoes of home. Even the 19th-century explorer Ernest Shackleton, when he had to abandon his vessel and set out on foot across brutal Arctic ice, commanded his crew to schlep the ship’s guitar and Bible. For survival, he knew the crew needed joy and, most importantly, hope.

I was not crossing the Arctic on foot, so I didn’t need to decide if there was room for a cook pot or a pair of shoes— on my boat I could have both. But I did have to limit how many cook pots and how many pairs of shoes I could carry. To be exact, aboard Daphne, I had four pairs of shoes: running sneakers, sea boots, sandals, and winter casual shoes. I had only two pots: a saucepan and a spaghetti pot. I had six T-shirts, two pairs of jeans, nine books, four spare fuel filters, and one set of watercolors, along
with some other stuff.

In 2008, when I purchased Daphne at the time of the economic downturn, right-sized living was becoming a hot topic in the news and on the Internet. The concept had many names: voluntary simplicity, simple living, tiny homes, minimalism. How do you decide what is the right size? What is too big, too small? 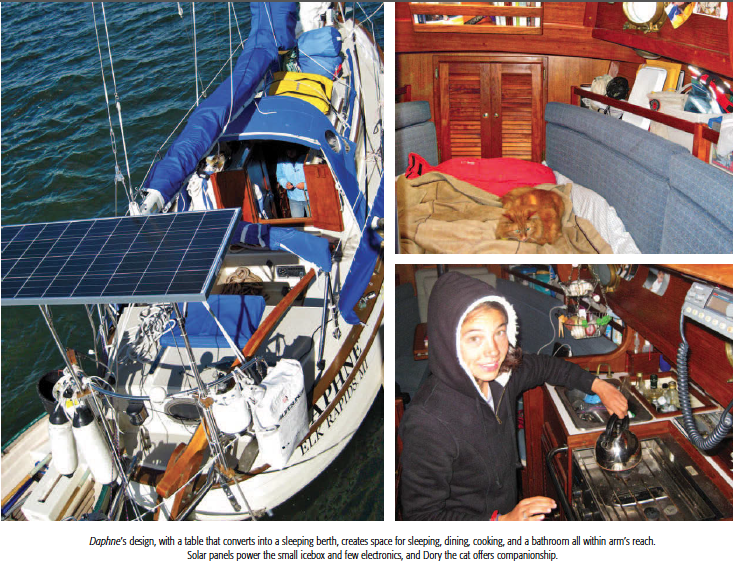 One popular blogger proposed the “100 Things Challenge,” a call to people to pare down their personal belongings to only 100 things. I couldn’t do that, nor did I want to try. Once I started counting I quickly reached the max. Are four pairs of shoes four things, or eight? Does a box of crayons count as 24 because it includes two dozen colors? I decided counting was not a worthwhile approach to defining the right size for my life.

Then there are physical measurements. Some in the tiny home movement argue that a home is only tiny if it is less than 400 square feet. While Daphne most certainly fit those parameters, my “home” expanded beyond the hull as well. My shower was at the local gym and my extra storage closet was the trunk of my car. Even on board Daphne , the walls of my home were as far away as the horizon on a sunny day. So the limits of 100 things, or 100 square feet didn’t apply in my case.

Still, like the economic law of diminishing returns, there is a maximum amount of belongings a person can own before any more would be a hindrance, not a benefit. This idea is repeated in the biological idea of carrying capacity for a species or ecosystem. Daphne had a carrying capacity. To pack her full beyond that limit became too much, and my stuff became more burdensome than it was worth. There is a practical aspect to this. Tightly packed lockers that can’t breathe encourage mildew and make retrieving things a chore. A few extra feet in length might help with additional storage, but the cost of maintenance in time and money wasn’t worth it. Daphne was neither so small that I felt limited or uncomfortable, nor so big that I couldn’t manage sailing and caring for her on my own. When I was cold, I had a sweater. When I was tired, a pillow. Lonely, a kitty. When it was dark, as it usually was under the canvas cover in the winter season, I had a flashlight.

Daphne was the right size for me— small enough to know that Poseidon would test the heart as he will, and utilitarian enough to require baths be taken overboard. Small boat, big adventures; small space, big life.