I extended my arm in front of me and aligned the side of my palm with the horizon. It was only three fingers width between the horizon and the sun. I had about forty-five minutes before sunset.

Just as the sun was dipping below the horizon, I was turning into the Abescon Inlet. I circled around the green buoy marked “FL G 4s GONG” on the chart, which meant it flashed a green light every four seconds and sounded a gong as it rocked with the waves.

The city seemed quiet like an early Christmas morning and the lights glimmered like a well decorated tree. Lining the channel stood rows and rows of apartments, duplexes, and condominiums. Each one had a small dock with a little powerboat that the men would take out for their morning fishing trips. Three wind turbines, situated quietly at the edge, were waiting to be awoken by the storm to come.

Continuing down the channel I kept the red buoys to my right and the green to my left. Two men, seated at the end of the dock shouted, “Hey-aaay Daphne!”

“Hi!” I shouted back, and picked up Dory in my arms so they could have a look.

I looked at Elizabeth motoring through the channel in front of me. Then, turning to them I shouted back, “I don’t know!”

I have been traveling with Benji aboard his boat Elizabeth since I left New England at the end of September. I know why we sail separate boats, but can’t shout it across the gunwales in only a few words. 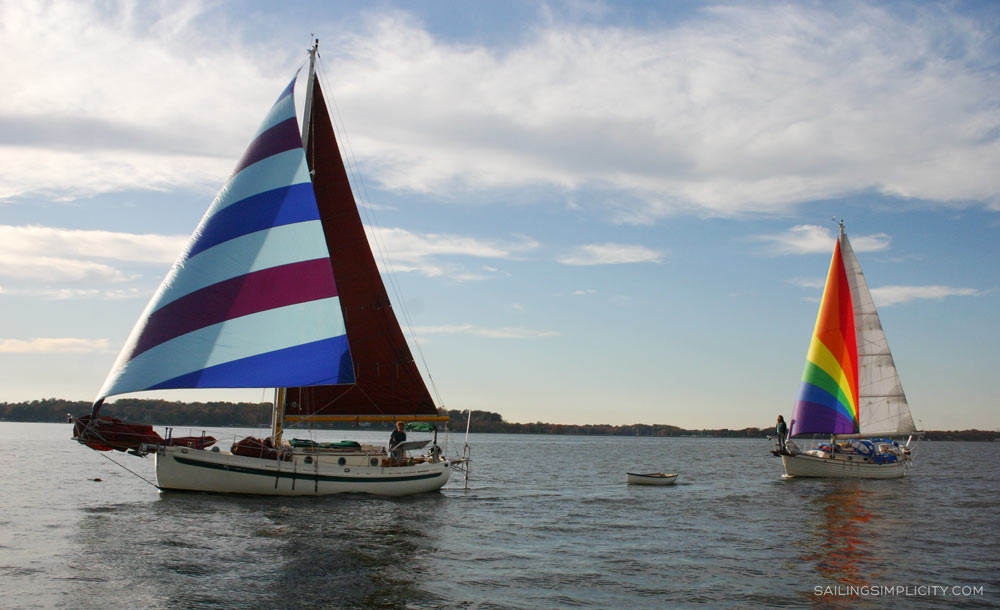 I pushed the tiller over to port and turned northeast into a smaller channel that wasn’t marked with the traditional navigational buoys. Instead, the channel was marked with broken bits of wood, stapled together in the navigation shapes of a triangle or square painted red or green. Each extended from the water on a branch and lined the favorable part of the channel.

I could see a blue heron wading amongst the tall grasses that lined the small cove I was entering. I could hear a belted kingfisher chattering just before he dove. Turning his beak toward the water, he tucked back his wings and plunged through the surface, which was as smooth and glassy despite the rolling ocean waters I had just come from.

I watched the kingfisher as I slowly entered the channel. He gave the impression that he knew that I was coming. As I passed by each red triangle or green square the kingfisher would seem to startle and take flight. Then, I realized what he was doing. He perched on the tip of a red triangle. As I came near, almost within reach he would spread his wings, make a few sweeping passes, and land on the next marker thereby guiding me home. At the time I didn’t know it, but Abescon Inlet would be my anchorage for the next several days, and my neighbors were greeting me warmly.

You can find videos from this trip on my youtube channel.