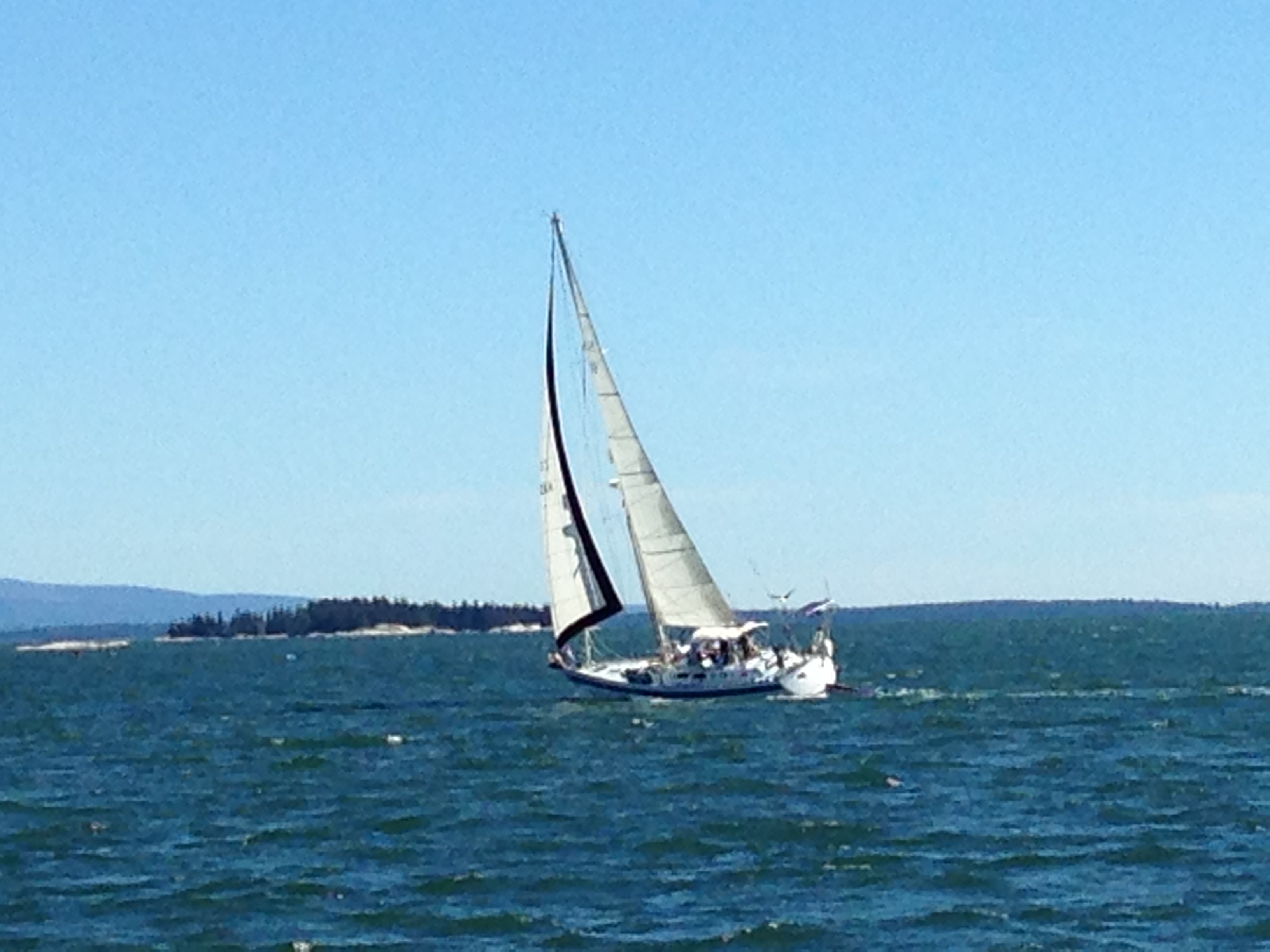 Solo sailing has always been a significant part of my sailing education. No other type of sailing even compares to the growth and challenge provided by long-distance solo sailing. When I sold Daphne my biggest concern was that I would lose the skills and perspective that I had developed while on my two-year solo voyage. Benji shared the same concern for himself. So, it felt natural that we make a pact: To create several solo opportunities for one another each year. Unfortunately, this year some restrictions challenged our pact—namely, the cost of  insurance for singlehanded operation of our new boat.

Ben and I both recognize that when we share boat operation responsibilities, it feels a bit lazy; there’s less to do, less to worry about. But with Ben away for a week, I decided to seize the best opportunity available: set sail with a friend of mine—someone who knew nothing about Rocinante, who was primarily a tall ship sailor, and who wouldn’t share the same sense of responsibility for Rocinante’s safe operation that I did.

I had to think fast and keep on top of navigation. Several times we plotted quickly on the chart, and decided to tack immediately upon determining our exact position.

The first day out went smoothly without a hitch. We anchored before sunset, cooked a delicious curried cashew & kale dinner, then slept under the stars in the cockpit. The next day, we awoke before sunrise and immediately weighed anchor, still in our pajamas. The barometer (www.wempe-instruments.com) was creeping closer and closer towards Fair and there wasn’t any wind, the water was like glass. We motored a few hours, then dropped anchor right next to the schooner on which Ben was working. It was a lovely reunion and Parker and I got to spend time with Ben and the crew—who challenged us to an impromptu race!

In the excitement of it all, Parker and I weighed anchor and got underway without stowing for sea. It was chaos at first, and things quickly began to go adrift below. I bustled around stowing dishes, hoisting sails, putting books back on shelves, all the while trying to keep a tight eye on the chart as well. Once everything was back in its proper spot, Parker and I tacked up a narrow chain between a tight group of islands, heading for The Reach. Submerged rocks were scattered everywhere and the wind was strong. I had to think fast and keep on top of navigation. Several times we plotted quickly on the chart, only to decide to tack immediately upon determining our exact position. That’s how swift things were happening. Rocinante is a fast boat! The challenge was fun and I felt vital. While not quite exactly like solo sailing, I recognized an elevated level of responsibility and leadership aboard Rocinante for the first time since we purchased her. Instead of Ben and I working together, carrying out the functions of the boat that we know well, and fully trusting one another, I was teaching Parker new roles, new skills, new tricks. Parker is a quick learner and trustworthy person, however, I was still taking on most of the work myself. The independence was gratifying.

We, of course, won the race—even though our ‘competition’ was 20′ longer, short tacking to weather on a Bob Perry design is no match for a gaff rigged schooner built in 1872! After we rounded the last windward buoy, we turned towards The Reach, eased the sheets for some comfortable sailing, and coasted into anchorage. That night we enjoyed the music of a steel drum band and the sounds of laughter from the surrounding schooners.

In the morning we rowed over to visit Ben again and joined him and the crew for breakfast. Our morning was lazy, even though we had to return to our starting destination, ending our  journey. When we finally set sail, the wind had diminished to an inconsistent 5 knots. We drifted up The Reach, exited the Northwest end, then turned south. A thick fog bank sat on the distant horizon but quickly rolled up the bay and engulfed us. We were soon sailing  in thick fog and the sun was setting. I’m not bothered by fog travel or night travel. I even enjoy the challenge. However, the combination of fog + darkness is something I try to avoid. But that night we would be stuck in both. I asked myself if I should to proceed to our final destination—still some 4 hours away, or anchor before sunset. With some prudent navigation, and a keen lookout, I decided we could continue.

Parker and I prepared for darkness. I would need all the essential navigation tools (rulers, hand-bearing compass, fog horn, and chart).  Parker was positioned at the bow with a high-powered flashlight. “Lobster pot, fine off the port bow,” or “power vessel to starboard,” whenever he could see them, which seemed to be only when they were very close. I would respond with, “lobster pot aye,” and adjust course to dodge the buoy. The call-and-response communication style worked well for Parker and me. Like Ben and I, he is also a professional mariner aboard traditional commercial vessels so it went without saying how we would best communicate and navigate in the foggy darkness. Thankfully, the rest of the night was fairly quiet and routine.

I also turned on, what in my opinion is one of the more essential pieces of electronic navigation equipment, the radar. It far surpasses a chart plotter or AIS in usefulness and versatility. The radar does the very thing I cannot do in the fog: see. It showed me land shapes and vessels and their range (distance away). From that information I could triangulate and pinpoint my position on the chart. I often use radar in conjunction with dead reckoning to stay on top of navigation.

Parker and I dropped and set the anchor around 2230. There were two other boats anchored near us that we could see, but in the morning I saw a dozen more. The trip went without a hitch, but I learned one important lesson: We perform to the level of expectation.

When I sailed Daphne solo, it was expected that I be responsible for maintenance, upgrades, winterizing, sailing, and all the work related to the boat. Now that Ben and I share all the responsibilities, we divide and conquer, therefore some skills are called upon less often, sometimes never—for example, how to turn on the radar…a source of great frustration for the first 30 minutes of darkness! My goal is to continue to seek opportunities that require me to perform at a higher and higher level. Next summer, I plan to purchase that solo sailing insurance and take her out for a voyage on my own. My first mate? Dory, the ship’s cat, of course. If only he had opposable thumbs…