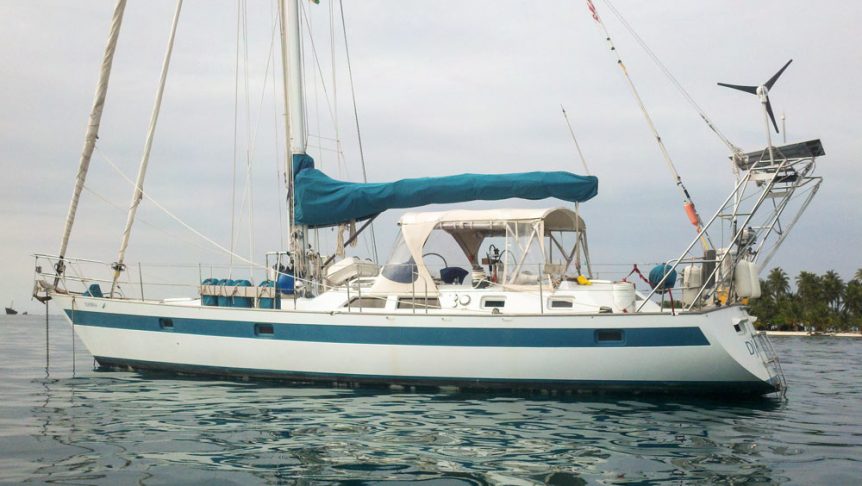 Simplicity is king on our boat. It guides our decisions.

When something breaks or needs an upgrade, the expedition is delayed or cancelled. We work to make our vessel unstoppable, especially now that we run a sail-training business.

Let’s assess two facts: (1) a simple boat takes less time to maintain (2) a simple boat costs less to maintain. With more time on my hands and more money in my pocket… I might actually be winning. Time and money, after all, are what most people don’t have enough of.

In 2014 we bought Rocinante, our Norseman 447 in Panama. The previous owners had sailed her on a 14 year voyage around the world. That is a lot of time to install and “upgrade” umpteensystems, gadgets, and so-called conveniences.

Within a few days of taking ownership, we were already making Rocinante a bit simpler and a bit lighter, by removing:

(1) The Stereo, DVD player & TV—we prefer to listen to the sounds of the ocean and sealife.

(2) The Microwave—We like savoring each moment… even the moments of anticipation as we reheat our leftovers and hope they’re not burning.

(3) The Rail Mounted BBQ—It took up space on deck, added windage, and looked like it was waiting for a wave to set it free. An occasional grilled meal wasn’t worth the nuisance. Were we dockside carnivores, we would probably love it.

That was the beginning of a process of simplifications that has continued for the last 5 years. Rocinante is so light now that we need to lower the waterline nearly 5 inches!

Personal preference aside, we also removed some things because they broke, leaked, needed a part, or became obsolete. We don’t worry about another repair.  Instead, we celebrate the opportunity to simplify!

The goal has always been simplicity, efficiency, safety, unstoppable-ness, and sailing performance. The following are some of the simplifications we have made.

Pressure Water: The pump needed new seals. We ditched it along with 30 feet of hose and the corroded faucet in the galley. We’ve never looked back. A foot pump provides all the necessary pressure to be comfortable cooking and washing.

Jerry Jugs On The Rail: Before I started sailing offshore, I envied the “salty” look of jerry jugs lashed to the side decks. But now, having sailed with jugs lashed to a dipping rail, I’ve reconsidered it’s seaworthiness. It is too much weight and surface area in the direct path of blue water washing over the deck. We removed 175 lbs of diesel on our side deck. Now we keep two 5 gallon jugs, one fuel, and one water, lashed to the granny bars, which are inboard near the mast. Our tanks hold 140 gallons of fuel, ample fuel for every coastal and offshore expedition we’ve done.

The Conestoga Wagon: Rocinante came with a combined dodger and bimini. Very convenient when at anchor—superior UV and rain protection. But it’s 100% ridiculous when sailing. Um, how can you see the sails – and don’t tell me to lean way off to the side when I’m in a gale! Teresa built a simple dodger. We have a full view of our mains’l, and that’s important for learning proper sail trim during our expeditions. We avoid the tropics, so we don’t often feel we need a bimini. Instead, we have a boom tent for sun protection at anchor. When rigged properly, it can keep the cockpit and companionway completely dry in a downpour.

Water Maker:
The cost and the maintenance of a watermaker is substantial. The one aboard Rocinante was not pickled correctly, and the pump had failed. Rather than repair and replace, we decided to remove it – and we never missed it. We live comfortably. We drink, wash, and cook with water anytime we need to. But, we find ways to reduce unnecessary water use. Teresa even brushes her teeth with saltwater. Apparently, you can pay a premium for “salt toothpaste” at Whole Foods, or come sailing with Teresa. She will show you how (This is not required during our sail-training expeditions. It’s an option for the most rugged souls.) The longest passage we sailed on our water tanks is twelve days with six people, with an undetermined amount leftover. So far, so good!

Hydraulics:
Rocinante came with a hydraulic backstay and boomvang. We felt like cool kids with racing gear, and we relished in the fact that our new boat was fast enough to warrant such gear. But, the backstay was leaking at the Wiper Seal, a very common problem. We had the replacement parts aboard, thanks to the previous owner. While we were in Colon, Panama, a dock neighbor, who had the same set-up, helped us make the repairs before we set sail on our 3,000nm “shake-down”. All was going hydraulically well until last year, when the multifunction control panel began leaking fluid onto the engine. Having logged thousands of miles each year, we knew a leak was inevitable. But, we decided that one hydraulic seal job aboard Rocinante was plenty. The entire hydraulic system has been removed from the boat. We made a short jumper for the backstay, and bought a simple Garhauer Vang. This is now a fairly unstoppable set-up. Plus, we haven’t noticed an effect on the overall cruising speed. Sure, if we were measuring speed in a 3-hour race, we might lose a few minutes. But we measure our cruising speed in days, not hours, and that hasn’t changed.

But wait, there’s more:
Stay tuned for more stuff we’ve removed in the next post, and one BIG ONE in particular we just ditched! But in the meantime, let us know what have you removed from your boat to simplify, and why? Plus, don’t forget you can join us aboard Rocinante, and personally inspect all the removed stuff! Oh wait! 🙂