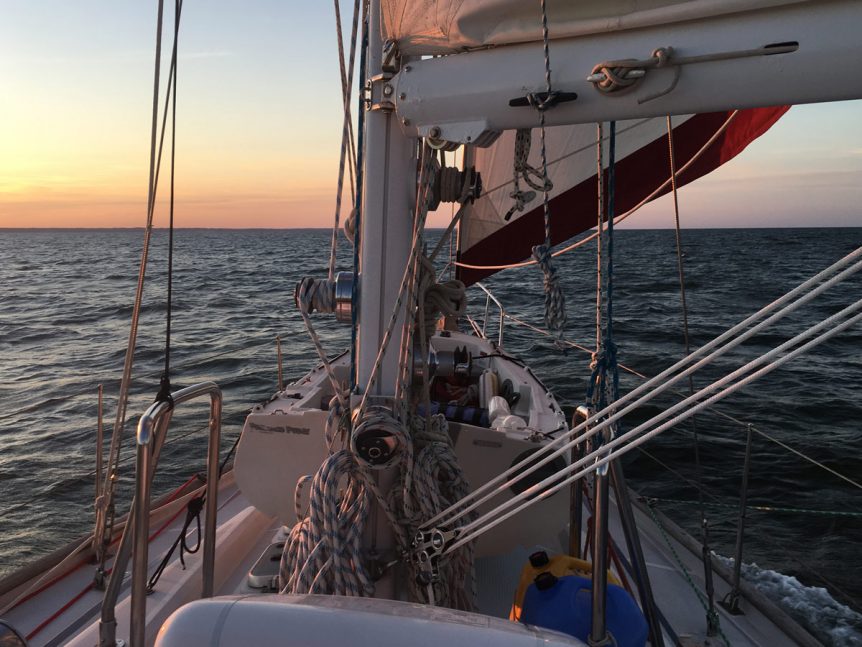 In 2014 we bought Rocinante, our Norseman 447 in Panama. The previous owners had sailed her on a 14 year voyage around the world. That is a lot of time to install and “upgrade” umpteensystems, gadgets, and so-called conveniences.

Within a few days of taking ownership, we made Rocinante a bit simpler and lighter by removing the Stereo, DVD player & TV as well as the microwave, and rail mounted BBQ. See Part 1 of this blog post for more removed items!

That was the beginning of a removal and simplification process that has continued for the last 5 years. Here are 6 more items we’ve removed with much success and never a regret.

Scuba Tanks and Holders: We don’t dive often enough to take up the precious deck space with tanks. The space previously occupied by scuba tanks is now home to 1 fuel jug and 1 water jug. We moved those jugs off the side deck closer to the centerline and lashed them to the granny bars. Here they are less likely to take waves, put less stress on our stantions, and allowed us to remove the board to which they were lashed.

Lights & Wires All Over: I wish I had kept the pile of wire that we removed from Rocinante over the years. I would love to measure its overall length and weight. I’m guessing several hundred feet and possibly 75+ lbs. Lights were everywhere in the cockpit. Mood lighting, safety lighting, night lighting. It was all there, and so were the wires. Now it’s all gone. We removed dead wires that were left in place “just in case we need them again.” Not our style. Run it when you need it. Remove it when you don’t. Clean. Safer. Simpler.

Thru Hulls: Possibly one of the most satisfying jobs on a boat is filling in a hole in your hull. When our aft head needed a rebuild, we decided to ditch it in favor or an Airhead composting toilet. We removed two thru-hulls: a saltwater intake and a toilet discharge. We love the Airhead, and we love having fewer holes in the boat. Some people are skeptical of the composting head. There is a learning curve, but once you’ve got it figured out, it is great. We also have a flush toilet in our forward head. If it were just the two of us, one toilet would be plenty. With students aboard for our sail-training expeditions, we like to offer options.

Hot Water Heater: For hot water, we use a sun shower, or we boil water in the pot/kettle. Simple. We can shower on deck or below. We take a warm shower whenever we want. We like our comforts too.

Pedestal mounted GPS: We typically sail by paper chart, hand bearing compass, and parallel rulers. We rarely turn on the GPS. Traditional navigation is part of our sail training curriculum — triangulation, dead reckoning, running fix, set/drift, are just a few of the skills we teach. We do it all — rain, shine, night, fog. Naturally, the pedestal-mounted GPS that stares you in the face while at the helm had to go. It’s a real hazard at night because it kills the night vision, which takes a solid ten minutes to develop. Like the stereo, it detracts from the real experience and shuts out your surroundings. Stare at the chartplotter long enough, and you never learn to recognize a vertical formation on the horizon, which means a storm approaching. Our students are skeptical at first when they don’t see a chart plotter in our cockpit. But, by the end, when we finally do introduce electronic navigation, they’ve come to realize the navigation skills they’ve learned help make them a better sailor, and that far exceeds the precision of a chart plotter.

Stern Arch: The most recent removal was the arch/davits. In 2015 when we installed “Monique”, our Monitor Windvane, we made a decision to render the davits useless. With Monique mounted to the transom, the dinghy no longer could be hauled via the davits, but we hadn’t been using the davits anyway. Our preference is for a deck mounted dinghy where the weight is more centralized and the dinghy is out of danger from being torn off by breaking waves and following seas. Our arch became just an overbuilt, overhanging solar panel mount. This spring when I noticed the mounts were leaking water into the aft cabin, I decided it was time. Rather than re-bed the arch, we chose to remove it. We’ve removed 200+lbs of stainless steel that hung 4 feet past the transom. Our solar panels are now mounted on the side rails.